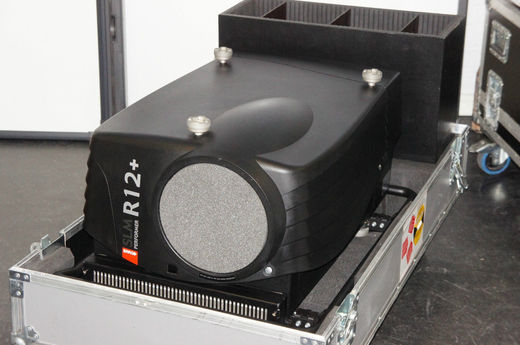 Crafted from aerospace aluminum and birch ply, the X5 is a unique, compact enclosure that is now ready to dig its claws into the touring market. Using its Space and Vortex technologies, Flare Audio has effectively created a sonically invisible enclosure; in other words, only the information that’s being sent to X5 is coming back out. And it’s working…

“The first impression I had when hearing X5 was that it just sounded so different to what I was used to hearing, and I have to say I wasn’t quite sure why,” states acclaimed FOH engineer, Martin Walker, whose 30 years in the business have seen him mix for the likes of Slash, Judas Priest, and now Iron Maiden. “I could only equate it to the same feeling I had when I first heard line-array; that was a whole new listening experience, and I feel this is similar. It isn’t that you’re necessarily getting any more out of the box than any other line-array, the amazing thing is what X5 is not giving you: the perceived distortion and box resonance; it’s different, and it’s certainly very innovative.”

X5 is a passive, three-way box and combines one 15-inch driver, two 6.5-inch drivers, and two one-inch drivers. Thanks to its interchangeable HF plates, there are also a wide range of dispersion options available, which means X5 can be equally effective when ground stacked or deployed as a single FOH enclosure. Standard dispersion is 10v x 90h.

X5 boasts a slim and compact design (795mm x 425mm x 230mm) therefore it takes up minimal space in the truck or the warehouse, and it’s also very easy to maneuver via its two ergonomic handles. As a result of these attributes, its integral flying system allows for an entire rig to be safely flown by one person. In addition, the aluminum casing can be anodized any color to suit the buyer.

When Walker first got hands-on running a live band through X5, he was not only impressed by the system’s overall power and headroom (max. SPL 126dB), but also at how easy it was on the ear, even when being driven hard; and how engineer-friendly it was:

“I really must reiterate that it’s all about what X5 doesn’t produce that makes it special: there’s none of that horrible, cloudy stuff that we’re all used to hearing, it’s just a very musical sounding box. It also makes the engineer’s job easier as it’s such a responsive system; I found myself spending half the time I normally would tweaking the console during setup.

“You know, 99.9% of people wouldn’t realize they’re hearing box resonance as their brains have been so conditioned to it over the years, so a good quality box will always sound fine to them; but if they were given an A-B situation… Well, that would be a different story, believe me!”